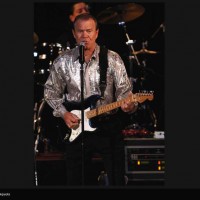 This was an article originally written for my "Profiles" series on Associated Content/Yahoo in 2011 titles "Country star Glen Campbell and Alzheimer's: profile of a Rhinestone Cowboy." With the announcement of the release of Glen Campbell's last song today, I tweaked it and republished it on Examiner.

It is with great sadness his many fans learned on June 23, 2011, that 76-year-old Glen Campbell has Alzheimer's disease.

When the Coen Brothers' remake of "True Grit" came out in 2010, the role of Texas Ranger LaBoeuf was played by superstar Matt Damon. However, in the original 1968 version, country music star Glen Campbell played LaBoeuf opposite movie star John Wayne after Elvis Presley demanded top billing for the role and lost it.

Glen Campbell has had a diverse career, from singing star, to movie star and even host of his own television show. He has even provided the Elvis-inspired voice of Chanticleer in "Rock-A-Doodle."