How the Deadly All-Natural Movement Killed My Mother


People are so strange. They want to look for a hidden motive as to why people are passionate or outspoken about certain topics. In my case, because I work in skin care, many people want desperately to make the assumption that I am outspoken about the harmful lobbying, fear mongering and dangerous misinformation spewed by the "all natural" movement because I want to sell them a jar of something.

Allow me to enlighten you.

In the early 1980s, my mother developed a small lesion on her lower leg a couple of inches above her ankle. An avid reader of "Prevention Magazine" and a subscriber to the early days of the "all natural" movement, my mother made the fatal decision to treat her lesion with "natural" home remedies from her kitchen and garden. The lesion got larger over time, but although I begged her many times to go see a doctor, she insisted that "all natural" was the way to go.

No amount of honey, lemon water, olive oil, essential oils, baking soda and even bacon grease (which was a recommendation in something she read) worked. I tried making an appointment for her but she cancelled. I tried getting her doctor to call her but was informed that it was not legal for a doctor to "solicit." Finally, after the lesion was larger than the width of a pencil eraser, I called her doctor's office, said my mother wanted to speak to Dr. Gregory and then called down the hall and told her she had a phone call. She was so flustered when she realized what I had done that she stammered out she had something on her leg she needed to get checked and made the appointment. I paid the price of her anger until the day of the appointment when we discovered it was melanoma cancer which had spread up her leg. She had all the fleshy part of the inside of the affected leg removed from her knee to her ankle almost to the bone.

Thanks to the drugs and "unnecessary surgeries" the "all natural" movement puts down, she did in fact live almost 10 years after that, and some of them were good years, but the melanoma had metastacized into her lymph nodes, and her life from that day on was a series of waiting for the other shoe to drop, and indeed, it kept dropping. Next came removing more tissue from her leg, removing the lymph nodes in her groin, then the lymph nodes in her abdomen. She had chemotherapy more than once which slowed the progress of the cancer, and she went into remission two or three times for a year or more. However once the cancer reached her abdomen, from there it slowly spread into her other organs and finally into her brain. She died in 1991.

Misinformation Spun by the All Natural Movement

I have read and researched the claims of the "all natural" movement since then and been shocked to see how many relatively intelligent people believe them -- because "all natural" SOUNDS good. They want to believe those crazy articles that claim you can turn to your kitchen pantry to cure what ails you. These articles are rarely documented and hardly ever include any reputable clinical trials. 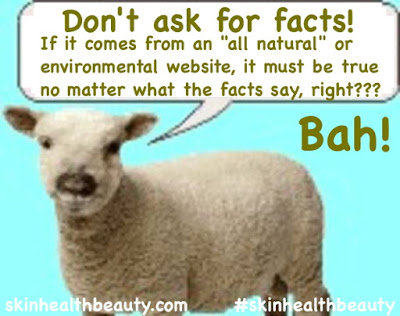 Worse, many of them are spun by the big, secretive all-natural lobbyist group that calls itself the Environmental Working Group which basically makes up its own data and trials, and then quotes itself likes it's a separate source on its spin-off sites like Skin Deep or CLEAR, etc., where the misinformation is then picked up by all the copy-and-paste mom and pop "all natural" blogs where it is then disseminated to sheeple on Facebook through countless memes. So what harm does it do to put food on your face and use essential oils instead of medicine?

A lot of harm.

The "All Natural" Placebo Effect

It's a placebo. It makes you "feel" like you are doing something when you might just be masking a real problem. People die from this all the time, but you never read headlines like "All Natural Movement Kills Again." The cause of death is listed as cancer, heart failure, diabetes, kidney failure, stroke, etc. but the REAL culprit is the "all natural" movement that convinced these poor people that they could treat themselves at home with home remedies.

The "All Natural" Fear Effect


By the way, the reason I always put "all natural" in parenthesis is because unless you grow it in your own garden, the stuff called "all natural" usually goes through some kind of processing. Essential oils and olive oils, for instance,  often use chemicals in the refining process.  So do the makeups and cosmetics that frequently call themselves "all natural."

Let's face it, the "all natural" movement is simply not what it is quacked up to be. It's just another BIG BUSINESS out to scare you and take your money.


Ask me about amazing clinical skincare products and start your way to clearer, healthier skin today! Join me on Facebook or email skin_and_health@yahoo.com for more info! I would love to help you have healthier skin!

ASK KATHRYN: What Is Skin and What Does It Do?

Everyone has skin, so we all know what skin is… or do we?

Do you take your skin for granted? Your skin is the largest organ of your body, weighing six pounds on average. Skin has several layers including a dead layer on top and a protective barrier. It is made up of several different components, including water, protein, lipids, minerals and chemicals.

The numerous jobs of your skin are extremely important to your overall health and survival. A few of the vital functions your skin performs include:

Do you think of skin care as a beauty routine? Proper skin care is much more important than that.

Healthier skin does a better job of executing these tasks than unhealthy skin does. Proper skin care helps maintain the health of this vital protective organ. This may result in more beautiful skin, but skin care should really focus on the health of your skin.

Your skin will change constantly, regenerating itself about every 27 days. Over time, various factors cause other changes: aging, genetics, gravity, exercise, environmental condition, medications, diet, but most of all — photo aging from the sun.

Older skin not only can develop wrinkles, brown spots, loss of firmness, enlarged pores, and sensitivity, but it can become more fragile and thin, bruising and tearing easily.

The most important preventative measure to maintaining healthy skin is protecting the skin from the sun by practicing "safe sun:" seeking shade, wearing protective clothing and using generous amounts of sunscreen. Adding good skin care from appropriate products can go a long way toward protecting the skin and even reversing skin damage. Skin that is protected and healthy will help keep the rest of you healthy longer. 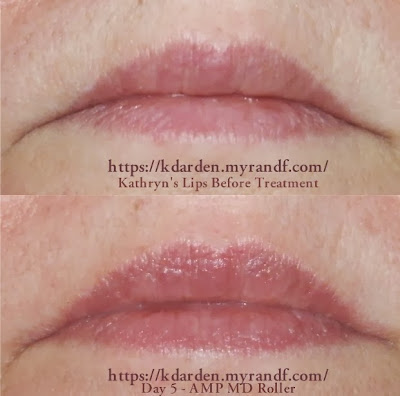 A reader asks: What should I use to plump the wrinkled skin above my upper lip?

Combining the new Acute Care patches with Lip Renewing Serum and the micro-needle skin roller is the perfect combo for the lips and skin around the lips. The patches will start FILLING the wrinkles almost immediately, just like an injectable.

The roller and serum will help REBUILD your lips and your upper lip area over time with consistent use. If you combines them, you will get faster, better, longer lasting results. Toss in our lip microdermabrasion, and your lips will be smoother, fuller with less wrinkles around them.

If you have a skin care question, leave a comment below or send me a message! All ASK KATHRYN posts are anonymous.


Ask me about these amazing clinical skincare products and start your way to clearer, healthier skin today! Join me on Facebook or email skin_and_health@yahoo.com for more info! I would love to help you have healthier skin!

Posted by Kathryn at 1:10 AM No comments: 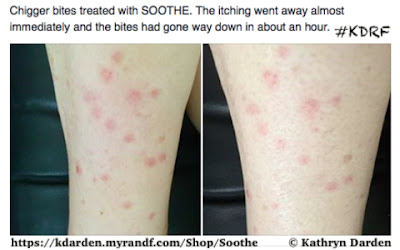 Recently while out hiking I got eaten up by chiggers. My right leg had about 16 bites from the tiny but annoying insects between my calf and my ankle just on the inside with a few more bites up to the knee and on the other side.

I was complaining about it on Facebook and took a photo of my ugly leg when it dawned on me I should try SOOTHE for sensitive skin on it. After all, SOOTHE got rid of my rosacea.

Within 5 minutes of applying SOOTHE the itching was substantially reduced, and the red spots and swelling began to disappear in about an hour. After that, I had no more itching and the bites continued to reduce in swelling and the redness was gone by the next day.
If you are a victim of lawn pests like chiggers, ticks, fleas, gnats and other stinging/biting pests, you can basically choose to stay indoors, wear a pesticide, treat your yard, or treat your skin.

Ask me about SOOTHE for sensitive skin, rosacea, psoriasis, eczema and even chigger bites!

If you have a skin care question, leave a comment below or send me a message! All ASK KATHRYN posts are anonymous.

Ask me about these amazing clinical skincare products and start your way to clearer, healthier skin today! Join me on Facebook or email skin_and_health@yahoo.com for more info!